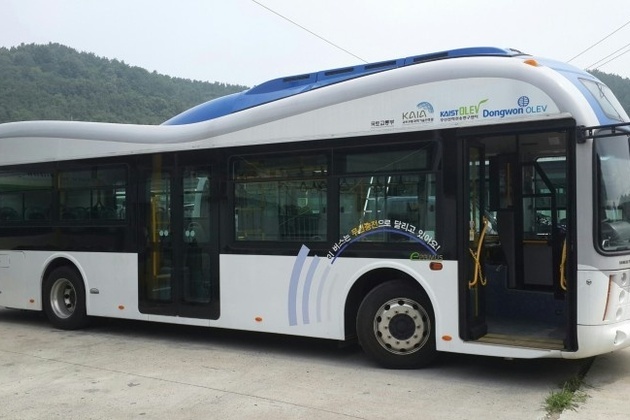 South Korea continues to pull out all the stops on the long road to a high-tech utopia. Last year, the city Yeosu hosted the Expo 2012, an international exhibition that highlighted emerging technology and design that attracted 8 million visitors over three months. Today, the nation has finally unveiled the world's first road-powered electric vehicle network for regular use.

Here's how it works. The network runs on newly-built roads that have electric cables and wires embedded below the surface. This allows for the magnetic-resonance transfer of energy to the network's vehicles, which not only already run on small batteries (about a third of the size of a typical electric vehicle) but also do not require the plug-in-and-recharge process common to other electric cars.

The project was developed a few years ago by the KAIST Graduate School for Green Trasnportation. According to a research paper published by KAIST, the commercial uses of EVs have experienced setbacks due to issues with the battery used by common electric cars. The researchers say that most batteries are a "technological barrier against consumers' desire for a common transportation vehicle." The Korean innovation shuns those issues by not relying on batteries (or fuel tanks and giant engines, for that matter), making the OLEVs lightweight and relatively low-energy.

The SMFIR technology, also developed by KAIST, works by running power through the underground cables at a frequency of 20 kHz, creating a 20 kHz electromagnetic field. The underbelly of the bus also includes a wire or coil that is tuned to recognize the frequency and then use an inverter to create electricity through magnetic resonance.

The basic make-up of the bus via KAIST

This is not the first time South Korea has tried to build an electric transportation network. In 2009, the Korean Advanced Institute of Science and Technology introduced a similar idea, though the roads would have had power strips that charged cars as traffic slowed to a crawl. It was estimated that every kilometer of road would have cost over $300,000 to implement such technology.

Only five to 15 percent of the road in the KAIST model needs to be replaced for their technology to work. This may seem like a low commitment, but construction costs and the inconvience of blocked roads could possibly sway governments against investing in the OLEVs, even if they are more energy efficient than other EVs.

And while it reamins to be seen whether South Korea's fresh EV-bus program induces any widespread change in how we use electric vehicles, it does stand to reason that if more roads and more cities did adopt the Gumi model we'd be one stop closer to a high-tech transportation system running exclusively on wi-fi.

To think, we'd be able to take the Megabus and watch Netflix without constant buffering.